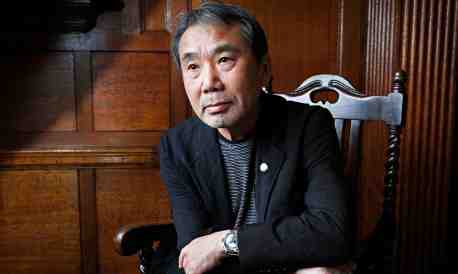 Haruki Murakami’s new novel, “South of the Border, West of the Sun” (Knopf), has little of the deadpan daring of his 1989 “A Wild Sheep Chase,” or of such later works as “Dance Dance Dance” (1994) and “The Wind-Up Bird Chronicle” (1997). “South of the Border” is narrated by a successful though vaguely unhappy jazz bar owner named Hajime. Once, as a child, he’d had a perfect friendship, with a crippled girl named Shimamoto. But he moved away, and he has gone on to break some hearts, marry, prosper and lose his ideals. Then, as in a scene from a movie (Murakami leans heavily on “Casablanca” throughout), Shimamoto walks into one of Hajime’s clubs, flourishes a cigarette and asks for a light. Hajime starts to feel whole again — yet not quite. The passing of time and the shame of betrayal keep getting in the way. And anyway, is this new, grown-up Shimamoto real or a phantom summoned up by need and imagination? It’s “Brief Encounter” for the New Age.

American writing schools may overdo the injunction always to show and never to tell — our young writers seem to know how to do little but show us things — but it’s advice that Murakami could have used. An amazing amount of this book is devoted to Hajime’s discussions of what Shimamoto means to him, what his wife means to him, what his predicament means to him. It’s possible that Murakami is playing changes on a Japanese genre I’m unfamiliar with, or that he’s needling Hajime’s narcissism in ways too Japanese for me to perceive. And he does have a wonderful way of making the novel’s action seem to play out against a background of serenely classical Japanese art. But he also seems determined to baby his imagination. For example, Hajime tells us of his delight in his rapport with Shimamoto. Yet here’s a typical exchange:

I catch the echoes of ’40s weepies. It’s what those echoes ought to be bouncing off that’s missing.

If you’re unfamiliar with Murakami’s work and want to give it a try, start with “A Wild Sheep Chase.” A melancholy yet irreverent phantasmagoria about an ad guy, a girl with beautiful ears, a mysterious sheep and Japanese guilt over World War II, it suggests a 21st century cross between “Absalom, Absalom!” and “Mothra,” and it’s still fresh and moving. My guess is that in this zingless new novel, the writer thinks he’s using Hajime’s tale to wrestle with what Thomas McGuane once called “the sadness-with-no-name,” a forlornness many baby boomers fall prey to and can’t shake off.

But his approach — hunting endlessly for the emotion’s metaphysical and historical meanings — pays off only in Rolling Stone magazine-style banalities. Recalling the end of his ’60s college days, Hajime tells us, “Like a drooping flag on a windless day, the gigantic shock waves that had convulsed society for a time were swallowed up by a colorless, mundane workaday world.” While the significance of it all piles up and the action drifts, the annoyed reader may start to wonder: Does Murakami really think that no one before his generation ever got scared of middle age, asked what life is all about and did a little screwing around in search of an answer?