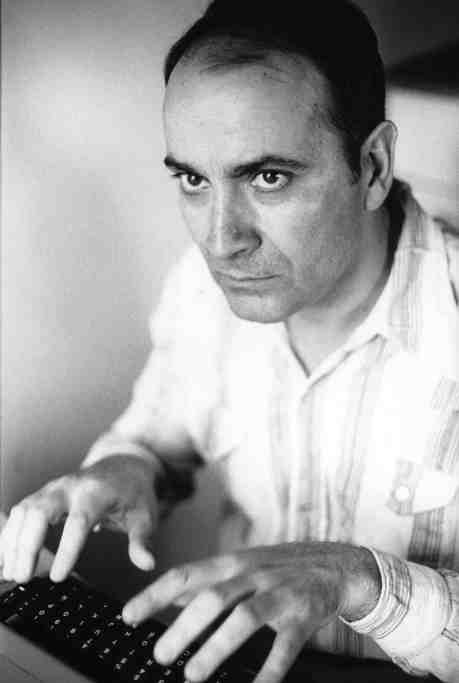 Manuel Puig’s new novel, “Eternal Curse on the Reader of These Pages” (Random House), is mostly a series of conversations between an empty shell and a sealed-off vault. The shell is named Ramirez. Once a union organizer in Argentina, he’s been imprisoned and tortured and has suffered a breakdown that’s erased virtually all his memories. A human-rights group has brought him, a blank slate at 74, to a New York City home for the aged. Larry, the vault, is an educated 36-year-old mess who’s making do with a miserable apartment, magazines retrieved from garbage cans, and much embittered Marxist and Freudian grumbling. Wheeling Ramirez through Greenwich Village is his sole source of income this winter. We eavesdrop on their talks.

Puig is a gifted mimic, and his writing has distinctive, lilting rhythms, so “Eternal Curse” skips right along; the two men’s persistent bobbing and pecking can be very funny. Eager to feed on someone else’s emotions and recollections, Ramirez goes after Larry, doing some shrewd doddering and asking question after question. Larry scolds and mocks the old man and, even as he doles out tales from his past, keeps the door to his emotions firmly shut. As Larry’s stories pile up, and as he decodes a diary Ramirez kept in prison (the novel takes its title from the diary’s first words), the two men’s histories merge and Puig’s intention becomes clear. The gap between fathers and sons, Puig is proclaiming, is so poisoned by male pride — by rivalry and disappointment — that it can never really be closed. Ramirez’s mind snapped when the guilt he felt about his son grew too painful; Larry still complains about his dad. The old man’s pursuit of Larry and Larry’s grudging indulgence of Ramirez are semiconscious attempts to atone — attempts that, given the bleakness of the novel’s design, are doomed to fail.

In his earlier novels, especially “Betrayed by Rita Hayworth” and “Heartbreak Tango,” Puig showed his feeling for dreams and for their wreckage. To tell his stories, he used whatever came to hand — journals, scraps of conversations, questionnaires, police-blotter records — and he got so far into some of his characters that their sorrow, generosity and terror seemed very pure. As long as an action, no matter how horrible, had its origins in a fantasy of romance, Puig seemed capable of forgiving and understanding; his empathy was lyrical and quick. Intelligent as “Eternal Curse” is, it has little of Puig’s magic; a wind cold enough to make a skeleton shiver whistles through these pages. Puig is in exile from his native Argentina, and this is the first book he has written directly in English. Still, it does seem awfully wrongheaded for a man deeply convinced that life moves on waves of desire and regret to prop a novel on two characters who won’t budge an inch.

© 1982 by Newsweek, Inc. Reproduced by permission.