Readers who have made it through the new generation of meta-comics and “graphic novels”—”Raw,” “The Dark Knight Returns,” etc.— might find some relief in “The Trouble With Girls” (Eternity), “Omaha the Cat Dancer” (Kitchen Sink), and “Dinosaurs for Hire” (Eternity). Inspired time killers, these R- or X-rated comic books have some of the freshness of good ’50s rock ‘n’ roll, or early Bugs Bunny. 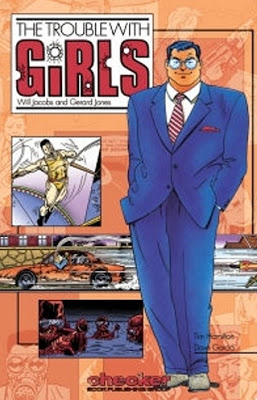 Lester (Les) Girls, the manly, ultra-competent hero of the adventure-serial parody “The Trouble With Girls,” simply can’t help being besieged by wealth, adventure, and beautiful women—while the life he’d like to lead would include a station wagon, a mousy wife, and some Ovaltine before bed. He’s a superhero pulled inside out. “Forget it, babe,” Les admonishes an adoring starlet. “You want a guy who can make expert love to you while gunning down ninjas. That’s not me.” “But Lester, you just finished making expert love to me while gunning down ninjas,” she reminds him. “O.K., sure. But my heart wasn’t in it,” he says, in real earnest. Mourning his fate, Lester’s as dopey and likable as Bullwinkle. The writers, Will Jacobs and Gerard Jones, have given him an amusing Native American sidekick who’s a connoisseur of regional cuisines; Les prefers more mainstream food—bologna, say, or doughnuts with sprinkles on top.

The best issues of “Girls” rival such half-cult, half-pop entertainments as “Raising Arizona,” “Buckaroo Banzai,” and the original, comic-book version of “Howard the Duck.” The illustrations, by Tim Hamilton, are a low-rent take on action comics like “Terry and the Pirates”: all hard lines, granite jaws, and graphic pow. The adolescent wit sometimes tips over into adolescent crudeness, but generally Jacobs and Jones’ memory for little-boy concerns and fantasies is bang on: Could you survive an elevator accident if you jumped at the very last moment? If you fell out of a spaceship, could you survive reentry by holding your breath and angling your body just so? 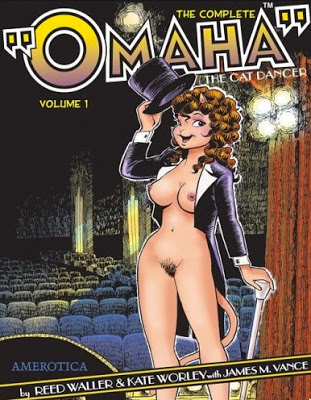 “Omaha the Cat Dancer,” a comic book that plays like a ballad, is a long-running countercultural soap opera. But the authors’ attentiveness to emotional shifts and entanglements—and the oddness of the characters’ having animal heads—can you pull you right in. The sex scenes are especially unembarrassed and expressive: what the characters do with each other always seems specific to their moods and situations.

The main cast consists of marginals who get by as hookers, nurses, photographers. One, a cartoonist, is the son of a wealthy crackpot—which brings the group of friends brushing up against politics and power, and supplies some “Mildred Pierce”-style melodrama. “Omaha” operates on a simpleminded but sweet ethic: camaraderie, playfulness, and pleasure are good; power and politics are bad. (If Kate Worley, the writer, and Reed Waller, the illustrator, are political, they probably vote Green.) Omaha herself is a nude performer who loves to dance in front of men but worries that she may have the wrong effect on them. The bad guys have a project which drives the action: a “campaign for decency” that’s primarily concerned with eradicating topless bars to make room for graft-ridden development.

Following “Omaha” is like leafing through the local underground newspaper in a small city. Even in the letters column, the authors maintain a low-key, “open” relationship with their readers, trading problems and advice. “Omaha” is touching and “natural” in a health-food-and-recycling kind of way. It finds the soft part of your head and takes up residence there.

Reading “Dinosaurs for Hire” can be like spinning until you can’t stand up straight anymore. It’s a parody of action-detective TV shows, the ones in which a squad of semi-vigilantes skirts the edges of what’s legal. The heroes (and actors) on these shows are often dinosaurs anyway, so there’s some fun simply in seeing that impression made literal. Archie the tyrannosaurus, Reese the stegosaurus, and Lorenzo the triceratops have arrived from outer space (in an as-yet-unexplained way), and they do occasional work for various law-enforcement agencies which hope to exploit their publicity value. The comic book is blessedly free of sanctimony. The three pals always overwhelm their handlers, and in one issue they successfully blackmail a presidential candidate who has threatened to reduce funding for the program that foots their bills.

The writing, by Tom Mason, has real pop relish. Archie, Reese, and Lorenzo are hot for women, weaponry, and wisecracks. “L-L-Lizards!” cries an alarmed drug dealer. “And they’re packin’ serious heat!” When Archie crashes through a wall, guns blazing at terrorists, he growls, “Room service. Who ordered wheat toast with butter on the side?” The “camera angles” employed by the illustrators (usually led by Bryon Carson or Chuck Wojtkiewicz) are the same shots filmmakers use to make a colossus of Clint or Arnold, and they’re infinitely more apt and satisfying here.

For the dinosaur trio, America is a trashy theme park you’d be a fool not to get high on; they’re wild about Hawaiian shirts, “Kojack,” bargain hunting, and negotiating merchandising rights with agents. The dinos are fond of trying to go undercover too: in one episode they put on facial hair and AT&T workmen’s uniforms and walk into an office, planning to do some snooping. When they’re stopped by a suspicious receptionist, who asks why it should take three of them to repair a telephone, Archie smiles hopefully and answers, “Union, ma’am.”