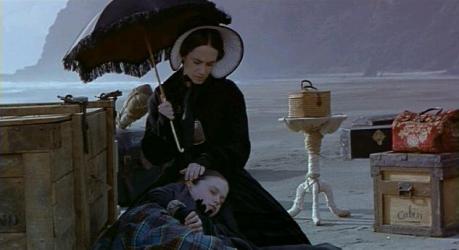 by Polly Frost and Ray Sawhill

Polly Frost: I can’t imagine anyone taking “The Piano” seriously, but I thought that as a silly movie it was on a level with “Beaches.” Holly Hunter plays Keith Jarrett-style music even though the film is set in the Victorian era. You get to see Harvey Keitel naked, sensitive, and in Maori makeup. He’s not the Bad Lieutenant anymore! Although I’m not sure I want the hero of my romantic fantasy to have feelings.

Ray Sawhill: Did you love it when, naked in the half-light, he caresses her piano because she’s not there?

PF: Of course. And I especially liked the idea of a guy working his way up under my hoop skirts to give me a lick.

PF: I’m all for that. And when Harvey finally fucks her it’s important that it’s not from behind. They’re face to face, and he looks deep into her eyes … But not in that tedious way men have of trying to figure out whether you’ve come or not.

RS: I’m a big fan of the frontier movie where all the work you ever see being done is the occasional closeup of a log being split. And I did enjoy the way the Maoris sat around all day and communed with nature, taking breaks only to disparage Sam Neill’s manliness.

PF: In the movie, Maoris exist as nothing but elemental beings — they’re sort of like the mud. For all her feminist/deconstructionist airs, Jane Campion doesn’t have the most progressive view of “the other.” But mother and daughter communicating in sign language, being a woman corseted and then set free — I eat that stuff like candy.

RS: It’s really a self-conscious, upscale version of “Clan of the Cave Bear.” Holly Hunter is a member of a superior species, i.e., a modern woman. So she takes no part whatsoever in making a life on the frontier. She just goes around acting passionate, furious, and indignant.

PF: It’s pure supermarket Gothic, with an “I’m in charge” attitude. Men oppress women’s sexuality because they can’t deal with it. Women are the more sexual, and men chained women up, and now finally in the Nineties men are awakening to their place as secondary to women. Alright!

RS: What do you make of the fact that liberation is seen as marriage to a macho, sensitive guy?

PF: It’s as key in these new radical/retro fantasies as it was in the originals not to want to cheat on your husband. He has to drive you to it. Here, everything conspires to make her have an affair. Bliss.

RS: The movie seems to be like catnip for post-feminists. Harvey blackmails Holly in such a perfect “I’m so sorry I’m ravishing you, but I can’t help myself” kind of way. Women keep telling me they find the film quite haunting.

PF: Some of the imagery does have that “Seventh Seal” quality. Although any time you have people in dark clothes wandering around for no reason on a wild beach I guess it’s haunting.

RS: The piano, Holly’s feelings, and the sea, our great mother.

PF: But how do you actually feel about the film? Stop shifting in your chair so uncomfortably.

RS: I guess I find it frightening.

PF: Maybe the fantasy gets to you more than you want to admit.

RS: What I really find scary is how seriously women can take their fantasies. The Holly Hunter character is a Nineties woman-with-a-grievance dropped into an era that’s truly repressive. She’s mute because the world is so unjust — isn’t that what the bad hair-do and the bonnet and the angry slit of a mouth are about? At least a conventional romance would give us a panting beauty popping out of her bodice. The women who love the movie seem to want to believe that their desire for a romantic movie represents a threat to the status quo and that their sexual pleasure represents a political triumph. Guy fantasies are more often presented as cartoons you’re not meant to take seriously.

RS: But isn’t it true that many educated women like their romantic fantasies to be presented with a solemn, high-art aura? That’s what I find so terrifying.

PF: Campion is like Margaret Atwood and Naomi Wolf. They have temper tantrums over their right to enjoy the most routine female fantasies.

RS: Though there’s no avoiding the fact that Campion knows how to make an eccentric, threatening image. One after another, in fact, with no flow between them.

PF: These women feel guilty about their fantasies. Just have the fantasies!

RS: Campion is such a bad director of actors. Holly Hunter seems to have decided that her character’s muteness means that she should never change her facial expression.

PF: Sam Neill is a wonderful actor, but the film emasculates him. He’s even called “dry balls” by the Maori at the very start of the film.

RS: And what is it about feminists and the Victorian age?

PF: Basically what it is is that women who like these movies go around in Laura Ashley dresses.

RS: Holly’s muteness, her hands reaching into that box to finger the keyboard, the nailed-up windows and doors — it’s all that tediousness about being “denied a voice.”

PF: It’s OK, you can calm down — the movie’s over. The honest film about women, sex and imprisonment is “Mrs. Soffel.” Gillian Armstrong just films what she wants to film as a woman. She doesn’t justify it at all.

RS: Maybe that’s why Armstrong’s “The Last Days of Chez Nous” is even scarier than “The Piano.” What is it that makes Campion such a perfect subject for journalists? I’ve never seen a single pan of any of her movies.

PF: It’s the whole Spike Lee thing — she writes out their copy for them. Campion plays at inspiration but she never allows it to take her over. Ray?

©1993 by Polly Frost and Ray Sawhill. First appeared in The Modern Review.