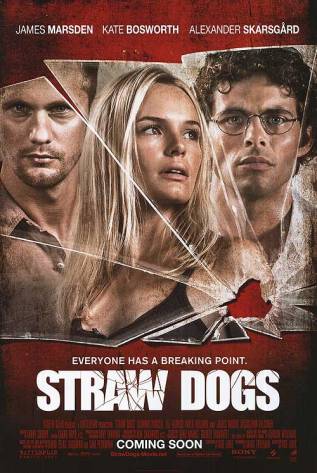 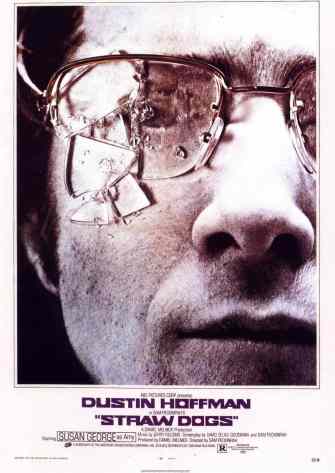 I was a little wary about watching Rod Lurie’s remake of “Straw Dogs.” Sam Peckinpah’s 1971 thriller is a genuine landmark — one of the most notorious, controversial films in movie history, and for plenty of good reasons, most of them having to do with Peckinpah’s unique gifts, viewpoint and sensibility. (It was one of those hard-to-sort-your-feelings-out-about ’70s movies, like “A Clockwork Orange” and “Dirty Harry,” that really divided audiences and got people arguing. When’s the last time a new movie gave you a decent excuse for a substantial argument?) Lurie’s a talented director, but what could a remake of “Straw Dogs” possibly have to offer? It’s not as though the material or the plot were the major sources of the original film’s fascination. For better or worse, it’s “a Peckinpah film” before it’s anything else. Plus I had my usual anxieties about whether the remake might spoil my memories of the original.

But over the weekend curiosity finally got the better of me and I slipped the DVD in the player. Quick verdict: not bad at all. While it has nothing of the distressing and arousing qualities of the original, the new version functions pretty well as a thriller in its own right. That basic, minimal mousetrap of a plot turns out — to my surprise — to be just enough to sustain tension through 110 minutes, even with the locale moved from Peckinpah’s creepy-English-countryside to a small town in the American deep south. Lurie, his team and his cast all turn in a lot of professional, committed work, and it’s a pleasure that the film works consistently on a recognizably human scale. Plus, a big relief: The remake in no way disturbed my memories of the original. I watched the film very directly, with plenty of curiosity about where things would go and how they’d pan out.
 
What’s peculiar about the new movie — and what makes me want to say a bit more about it than just “Thumbs mostly up!” — is the impulse behind it. It turns out that Rod Lurie made the new film in order to refute the evo-bio / Robert Ardrey vision that Peckinpah expressed in the original. You can feel this impulse as you watch the new movie, and on the commentary track Lurie confirms it at some length. Lurie supplies a good commentary track generally. He’s open and smart, and he’s amusingly rueful and funny about knowing in advance how pissed-off many Peckinpah fans will inevitably be by his movie. (I’m a huge Peckinpah fan, but I’m not the purist that some of my friends are.) While suitably impressed by Peckinpah’s talent and style, Lurie is appalled by Peckinpah’s we’re-beasts-underneath-it-all vision — he can’t resist calling it “fascist.” He says that in taking on the job of the remake he wanted to make a more human and more balanced, even somewhat feminist “Straw Dogs.” And that is indeed the movie he has made.

Still: how bizarre! I can understand the impulse from a “I’m choosing deliberately not to compete with Peckinpah on his own terms” point of view, and — who knows? — maybe Lurie really is the decent, humane, centrist-liberal he sees himself as. And why shouldn’t he express his own personality? Even so, given the cut-throat nature of the material, it’s a somewhat weird choice. Would you choose to remake, say, “Birth of a Nation” — using the original plot of it — to convey the exact opposite of the argument that D.W. Griffith made?

But my job as a viewer is to grant the artist his / her premises and see how things play out. I enjoyed the movie in a very simple, direct way … but I confess that I also couldn’t resist letting my brain tumble into some film-buff intricacies. Let me share a few of them.

Lurie’s humanist p-o-v forces him to deliver some of the film’s biggest moments with completely different shadings than Peckinpah did. In one of them, the Amy character stands in a window with her top off so that some workmen outside can see her naked breasts. In the Peckinpah movie, Susan George’s Amy is feeling annoyed with her over-intellectual, wimpy husband, so we understand that she’s offering herself up to (and taunting) the men outdoors — she’s baring her breasts in a gesture of overheated, childish hawtness and self-assertion, basically. She’s giving herself a dirty ego-blast. In the new movie, Kate Bosworth’s breasts aren’t shown (though we know she’s topless), and she isn’t taunting the workers outside; no, what she’s doing by presenting herself naked in that window is expressing feistiness and defiance. “Fuck you, I’m my own person,” is what she’s saying.
 
At the climax of the plot’s second act comes another infamous scene. In this one, the Amy character is raped by some brutal local studs. In the original, Susan George’s Amy is ripe, bruised and spoiled — she has spent much of the movie asking to be roughed up, and now she’s getting what’s been coming to her, and then some. In the new film, Kate Bosworth’s Amy hasn’t been asking for any kind of disrespectful treatment, and she most certainly doesn’t melt midway through the rape. (She also has about zero body fat on her. She’s one tightly-wound girl.) I’m not alone in finding the rape in the Peckinpah to be one of movie history’s sexiest scenes; I’m pretty certain no one will be tempted to find the new movie’s rape scene even slightly arousing. This may well be a good thing, morally speaking. It makes for far less galvanizing viewing, though.

Still, these choices all play out surprisingly plausibly — they result in a milder movie, yes, but Lurie and Bosworth (and, in the rape scene, Alexander Skarsgard) find ways to put the scenes over in their own terms. As far as dramaturgy goes, though, his approach leaves Lurie with one huge question demanding explanation. It’s this: If the story isn’t about how we’re all basically primal beasts inside, then what’s the source of the story’s violence? The plot in the original exists in order to torment Dustin Hoffman’s brain-heavy David into connecting with his instincts and his inner masculine nature and finally taking violent action. Lurie doesn’t want to deliver, let alone, endorse that message. So what on earth can he come up with as kindling for the movie’s climactic mayhem?

His somewhat banal answer: “the American south.” The local boys who bring on the apocalypse aren’t menacing gargoyles inhabiting a heightened, scary, mythical landscape, as they are in the Peckinpah. Instead, they’re basically decent lads — they’re viewed with some sympathy — whose moral development, we’re given to understand, has been crippled by limited education, narrow horizons and unappealing opportunities. Lurie even redefines the meaning of “straw dogs.” In the original, we’re told that the term comes from Lao Tzu: it evokes violence, impersonality, cruelty — the immense, uncaring universe itself. Here, a character tells us that “straw dogs” is local slang for townies who stick around after they’re done with school, and who go to seed while living off their high school memories. In the original, the violence that finds release erupts from the heart of life in all of its unfathomable, brutal mystery. What drives the violence in the new movie is … well, basically, small-town high school football gone awry.
 
Even the contrast between David and Amy has been diminished. In the original, David is a professor and Amy is his petulant, easily-bored child-bride — a former student. He’s her senior and her intellectual superior, but she has the elemental power of sex on her side. The new version’s David isn’t an intellectual — he’s a bright guy, but a screenwriter, not an egghead — and the new Amy isn’t a brat simmering in her own erotic juices. Instead she’s an actress in charge of her life and career. David and Amy have even worked on the same TV show together. In the original, they clearly represent mind vs. body. Here, they’re not just mates, they’re colleagues and equals.

This approach may have the virtue of being ultra-reasonable but it does leave you asking a few inappropriate questions. Onesuch: Why the hell don’t these competent, mutually-respectful partners have the sense to beat it out of town when things there start to get unpleasant? And the climax probably won’t inspire anyone to roar with horrified approval. There’s plenty of well-staged action to enjoy, but when the new David picks up his weapons and gets down to the gruesome work of defending his home, he takes action not because he’s finally connecting with his own bestiality and manhood but because, well, even the most decent guy needs to stand up for his principles sometimes, y’know? What the new version’s Amy is experiencing during the mayhem seemed to me more than a little unclear. The high-powered nitro that fueled Peckinpah’s vision has nearly all been bled from the drama, in other words. Question du jour: Is there something about the good-liberal point of view that inevitably neuters drama?

Still, though I can’t imagine anyone making a case for the new version as a particularly memorable film — there’s nothing nightmarish, drunken, upsetting, insane or hypnotic about it — I found it reasonably gripping. It’s a well-made thriller, if a little bland, mild and worthy. But what’s wrong with professionalism done with some conviction? Let’s be grateful for good-enough.

Watching the new version did illuminate the original in one way for me: it got me reflecting that part of the voluptuous, unsettling power of the Peckinpah original comes from the fact that it’s really a horror movie in the guise of a thriller. At its heart it’s a monster movie … only in Peckinpah’s shrewd, demonic telling, the monster is something we all carry within ourselves.