Writing in the 1960s was generally a matter of exuberance, insolence, drugs, and experimentation. Raymond Carver, who began publishing his terse short stories in the 1970s, helped bring fiction back to small facts, won with difficulty and painfully expressed. As he became better known, readers grew familiar with “Carver people” — aimless and bewildered blue-collar souls between marriages and between jobs — and “Carver’s world” — all stray ends, polluted streams, and rooms rented from widows. He was celebrated as the leader of a school of “minimalist” fiction, and was often described as America’s Chekhov, delivering not the corniness of mere stories but the real stuff itself: what comes between stories. For a few years, talk was abroad of a Carver-led short-story renaissance. By the time he died — at the age of 50, in 1988 — he was probably the most influential literary writer in the country.

Though he didn’t hide from the press, Carver became as mythical a figure as Salinger or Pynchon. He had worked at dead-end jobs, he was an alcoholic, and he smoked too much, too; lung cancer was what finally killed him. In photos, he didn’t look like a writer, he looked like a laborer — so, for some, he became a saint of authenticity, telling us the straight dope about stunted, one-day-at-a-time lives. The fact that he kept to short forms (essays, poems, stories) enhanced the myth: such brutal honesty about such hard truths could hardly be asked to fill out looser forms. He was so securely canonized that by 1993, when the filmmaker Robert Altman was publicizing “Short Cuts,” his adaptation of a number of Carver stories, he did so in the company of Carver’s widow, Tess Gallagher, and spoke often about his feelings of inadequacy in the face of his material.

Some of the stories do have an ugly power. If you’re in the mood for a downer, “The Calm” and “So Much Water So Close to Home” should hit the spot. And Carver’s touch with humor — particularly of a sad-one-moment, pugnacious-the-next, headed-nowhere-fast kind — is usually skillful. But most of his writing is mannered. The repetitions signifying a stumbling exasperation (“Will you please be quiet, please?”), the sentences that start on a high note only to give way beneath you, the foot-dragging rhythms, those not-an-epiphany epiphanies … It gets to seem mighty gimmicky mighty fast.

And since he repeatedly said that he wanted to be thought of as a realist, not a minimalist, maybe we should ask: who are these “Carver people” who do nothing but brood, drink, and watch their lives fall apart? For his fans, of course, Carver nailed the essence of loser America. But if you strip people from any class of their pride and energy, it’s inevitable you’ll be left with little but despair. It’s hard not to find his work monotonous and bathetic: all that booze, all those cigarettes and lonely failures to connect, that tenderly-highlighted inarticulateness. Carver flattens out his characters and their lives, then invites us to admire how humane and truthful he’s being. Story after story wants to do little, finally, but wipe you out and make you feel desolate — to give you a good, long look at the raw nothingness of it all.

How then to explain his reputation? It may be that, for writing students, Carver’s (easily mimicked) approach suggested a quick way to achieve the appearance of heavy truth. A little misery here, a broken family there, an awkward attempt at god knows what before all dissolves into entropy once again — voila, Insta-Depth. And for readers? My guess is that, for some of them, “literature” is a kind of faith always in danger of succumbing to evil forces (mammon, vulgarity, indifference). For such readers, Carver’s stories-which, if you buy into them, have an aura of misery reluctantly illuminated by shafts of radiance — can be occasions for worship and prayer, religious services for those still hoping for redemption by art.

The Carver myth of course wasn’t Carver’s fault. He did indeed grow up working-class, and he did know tobacco and alcohol all too intimately. But by his own account he was a bookish, sensitive guy who had wanted to be a fiction writer from his teens. He studied writing at a number of colleges, did a stint at the Iowa Writer’s Workshop, and spent much of his life as a teacher of creative writing. He worked closely (as the journalist Dan Max has shown) with the editor Gordon Lish on shaping his early stories for maximum lit-world impact, and won many big-deal prizes and grants. We might do better, in other words, to remember him as a writer, not an oppressed hod carrier, and as one who did remarkably well for himself.

The easiest way to sample Carver is to pick up “Where I’m Calling From,” an anthology of the stories he considered his best. If you want to explore further, try the individual collections. His early stories, gathered in “Will You Please Be Quiet, Please?” (1976) and “What We Talk About When We Talk About Love” (1981) have a menacing, off-balance feel. The later ones, collected mainly in “Cathedral” (1984), are more relaxed but, perhaps, less compelling. Skip the poems, which are embarassing, and the essays, which are worse.

If your tastes run to the minimal, you’ll also want to sample Anne Beattie, Frederick Barthelme, and Bobbie Anne Mason. If you prefer painful themes churning beneath mundane surfaces, then Richard Ford, Tobias Wolff, and Russell Banks may please. If you’re drawn instead to writers who aren’t so officially sanctioned, you might try Charles Bukowski and Charles Willeford, gifted lower-depths wallowers who wrote with comic-book gusto yet could also summon up currents of bitterness and melancholy. For sweet and funny visions of stray-ends America free of authorial gloom, you aren’t likely to go wrong with the work of Tom Perrotta, William Price Fox, Sarah Gilbert, or James Wilcox.

©1999 by Ray Sawhill. First appeared in The Salon.com Reader’s Guide to Contemporary Literature. 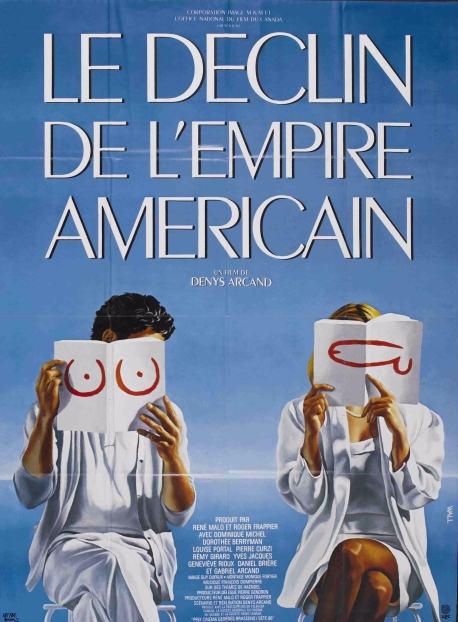 People may compare “The Decline of the American Empire” to “The Big Chill” and “Hannah and her Sisters”; like them, it’s a comic talkfest that takes place in an atmosphere of hypocrisy and comfort. But this French-Canadian film has an unembarrassed, out-of-the-mainstream feel of its own, and no fake portentousness. The story concerns a group of academics gathering for dinner and talking about sex. These conversations — the locker-room talk of sophisticates — are often raucously funny. We recognize that the theories that get spun are expressions in abstract terms of the characters’ personal concerns; we may come to suspect that the “decline” of the film’s title refers to the older characters’ experience of middle age.

Denys Arcand, who wrote and directed, has conceived his film in thoroughly sexual terms; the camera takes us through the web of words and into the characters. When he flashes back, he shows more than his characters divulge — he takes us into their privacy — and all along, he cuts away to images of natural beauty. The relaxed performances and the cinematography, with its attentiveness to changes of light, give us a feel for the characters’ relationship to their flesh, and a sense of how sex to them isn’t merely an athletic pursuit, it’s an imaginative one.

Arcand’s approach has the result of giving sex — the unforeseen effects it can have and the variety of things it can mean to people — a many-hued splendor. In a sequence that begins on a pier at dusk and moves into the evening, we watch the clouds and the water, we hear one of the men wonder whether, if the Soviets bomb the States, he’ll be able to see the explosions, and we see the couples move (in various states of arousal and misery) into bed. This sequence has the emotionality of a nocturne; Arcand gives us the illusion that sex is spiraling around us.

©1986 by Newsweek Inc. Reproduced by permission.

I guess I’m supposed to blog, is that right?