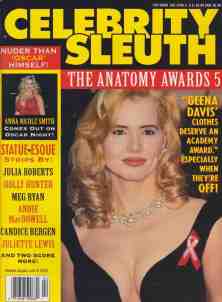 More and more of the images in the American sleaze magazine Celebrity Sleuth are taken from video screens. How is the sexual makeup of young men being affected?

As an adolescent, I was entranced by Princess Caroline of Monaco, whom paparazzi were forever snapping in states of semi-undress. Ever since, I’ve responded erotically to almost any photograph taken with an unusually long lens. By now there must be several generations of young men raised on TV whose imaginations have been imprinted by the visual qualities of the video image. All those horizontal lines! “Honey, would you mind standing behind the Venetian blind, just for a minute?”

I buy Celebrity Sleuth for the photos they run of naked actresses. Naked actresses have been my passion for years. As a boy, I enjoyed Playboy’s annual “Sex in the Cinema” feature more than I did its monthly smorgasbord of prettily-posed flesh. Movies being what they are now, it’s the possibility of seeing an actress I care about undress that keeps me a moviegoer. What gives me pleasure is the conjunction of the physical, the spiritual, and the esthetic — although when I tried to make the case to female colleagues that Sharon Stone had given a great performance in “Basic Instinct,” I was jeered down and informed that I’d simply been turned on. So I’ve kept it to myself that, in Jim McBride’s “The Wrong Man,” Rosanna Arquette gives her best performance since “The Executioner’s Song.” I know that someone’s going to say, You just liked it that she finally got naked again.

When you compare the horror-and-kung-fu bimbos who are also featured in Celebrity Sleuth with the real actresses, you understand a key distinction. The bimbos display themselves professionally; they’re there to serve. The actresses are relating to something, or focused on their roles, or projecting an emotion. They’re naked, yet retain their mystery. So you feel involved with them.

John Hinckley wasn’t unusual in having a fantasy relationship with a movie actress, and he may not have been unusual in thinking he had a real one. There may be a little Hinckley in many male moviegoers. The few times I met actresses who had dizzied me onscreen, I was confused and upset. They didn’t seem aware of what we’d been through together.

In Gérard Corbiau’s new “Farinelli,” about an 18th century castrato opera star, women fans swoon over Farinelli, who’s conveniently masculine-looking and broad-chested. He makes out with them and works them up, then steps aside to allow his (mangier but better-equipped) brother to complete the coupling. The actresses (Elsa Zylberstein and Marianne Basler) flush, breathe deeply into their sensations, and let feelings ripple through their bodies.

What Hollywood usually presents as an extravaganza of lighting, music, and set-design is here made to seem to occur inside the women; watching them is like watching those roses open at the beginning of “Age of Innocence.” I imagined I was a third brother, adept at Euro-connoisseurship; my wife tells me she identified with the women, enjoying being savored. So much for the hegemony of the “masculine gaze.”

Americans don’t have a comparable tradition of sexual appreciation. Celebrity Sleuth seems a perfect embodiment of our conflicts. It’s full of childishly smutty puns (“Enjoy Joan Chen’s Twin ‘Peaks’ And China ‘Moon'”), giggly italics, and lipstick-and-swimming-pool colors. At the same time, it’s indisputably reverential and adoring. The women are bathed in that special light that descends only when you’re chosen to appear in both a movie and a magazine. If pop culture has become the modern Gospel, these stills are our versions of those Renaissance panels that portray dramatic highlights from the Bible.

We might all learn a thing or two about actors by leafing through Marilu (“Taxi”) Henner’s sweetly inane, unabashed new autobiography, “By All Means Keep on Moving” (Pocket). To Henner, an affair is a “little work of sexually gratifying art.” About one such affair, she tells us, “Actors are usually so desperate for work that they’re inclined to create fantasy improvs. Lloyd and I had some pretty hot ones. One was a teacher-student act … Detention often included a few over-the-desk spankings.”

The early in-production pieces about “Showgirls,” Paul Verhoeven’s first film since “Basic Instinct,” have been confused. The journalists don’t seem to know what angle to take on the film, which is set among the strip clubs and topless revues of Las Vegas, and is almost certain to be rated NC-17. The problem is that no one involved seems ashamed of the project, or interested in making a political or artistic case out of it. They just seem to want to make this movie. In interviews, Verhoeven is suavely amusing about his taste for sensationalism, and the actresses speak seriously about their commitment to showing an “interesting world that’s worthy of depiction.”

Uma Thurman is set to play Marlene Dietrich in a film to be directed by Louis Malle from a John Guare script. It seems like perfect casting. Uma, along with such other young actresses as Diane Lane, Kelly Lynch, Jenny Wright, and Laura Dern, is something new — an American performer who conveys tragic sexual fatalism of a sort that we’re used to getting only from Europeans.

Uma appeared, of course, in “Henry and June,” the first film to be rated NC-17, and frames from some of her other movies are regularly featured in Celebrity Sleuth. Recently, though, she has been avoiding nudity, which is a pity. If she were to use her body more freely, Uma could be as redolent a presence as Dietrich, yet ratchet up the intensity and sensuality one more notch. She may simply feel she needs to defend herself against exploitation — but watching actresses fight to overcome exploitation is one of the great ongoing American screen dramas.

©1995 by Ray Sawhill. First appeared in The Modern Review.

Editorial thinking of today: Above all things, MUST. PUT. NONWHITE. ON. COVER. 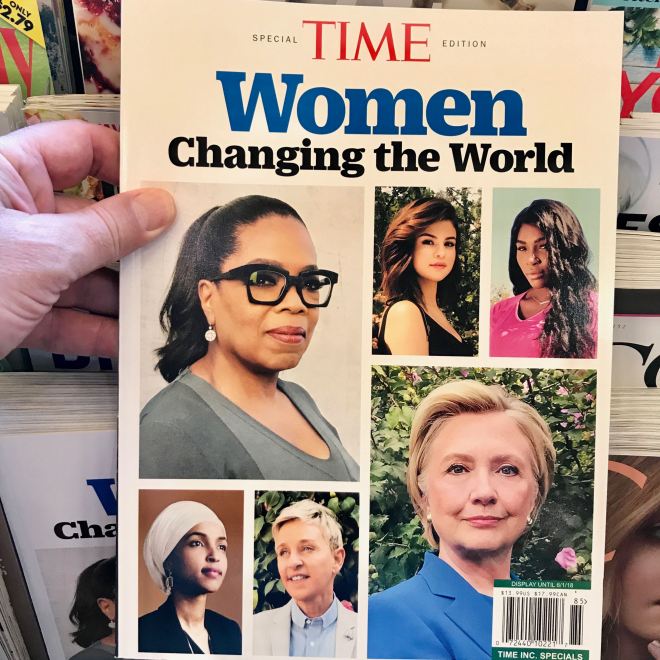