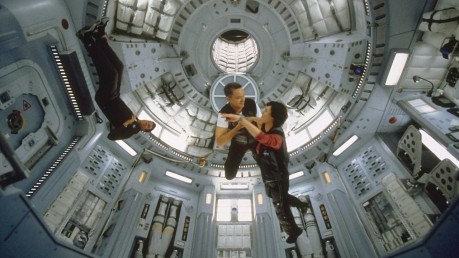 Last Saturday, after a week of media-free living in Mexico, my wife and I walked into a San Diego movie theater, where we watched a new science fiction picture in the company of a modest crowd. At first I was intrigued by its quiet tone. Some awkward moments made me worry that the film might lose its audience, but the crowd remained attentive. Then some passages of extraordinary beauty and daring took me another step in. By the film’s end I was quite moved. I spent the rest of the evening happily babbling about what the movie had made me feel and think.

The movie was Brian De Palma’s “Mission to Mars,” and only when we arrived in New York and I tuned back into the media did I learn what readers who follow the press’s coverage of movies already know — that “Mission to Mars” got the year’s worst reviews, a spanking almost as severe as that received by an earlier De Palma film, “Bonfire of the Vanities.” Friends told me of press screenings where viewers jeered the film, and after a first weekend of strong business, audiences for the film are growing sparse. The reviewers’ criticisms? The movie is slow, it’s unconvincing, it’s preposterous, it’s over-solemn. Rumor has it that De Palma was so humiliated by his notices that he canceled all his publicity dates after the reviews came out. “Mission to Mars,” the world seems to have concluded, just doesn’t work.

Beg to differ: it sure worked for me. I’d like to suggest that it might work for some other viewers too — at least if you don’t go to it expecting a big corporate space jam. Instead, it’s introverted and reflective, less a conventional clash-of-conflicting-desires drama than a mournful, sweet ballad on the themes of fate, adventure, and near misses. It’s narrative poetry in the guise of an outer-space adventure — not such a strange combination, if you think of something like “The Rime of the Ancient Mariner.”

It has to be admitted that De Palma’s movies are a special case. He has never had much gift for conventional persuasiveness. The acting in his movies can look college-production awkward, and, although he has featured such actors as Robert De Niro and John Travolta early in their careers, he sometimes makes bumbling casting mistakes. (Here, Armin Muehler-Stahl is as heavy-spirited and hammy as ever.) De Palma has always struck me as a born avant-gardist, a Donald Barthelme or Godard type who has applied himself conscientiously to the making of conventional pop movies. Perhaps he appeals most to people for whom art is a game anyway, and who don’t need a lot of persuading in order to join in.

For those who do find his wavelength, “Mission to Mars” offers a jaunty and gallant Tim Robbins; Don Cheadle doing a good job of suggesting mental horsepower and technical expertise; and a real find in Connie Nielsen, a poised Swedish beauty who suggests Isabella Rossellini with a couple of advanced degrees. There are some beautifully done stretches where De Palma takes you inside the kinds of mental states you might experience during moments of panic, as well as unusual moments when you’re drawn into a character’s cerebrations. Gary Sinise, playing a hurtin’ astronaut who feels he has nothing to lose, may not be the ideal actor for this role — he’s gloomy where he needs to be warm — but he comes through at his best here. The movie also offers some silent-movie style visual poetry, corny, obvious images that are transcended by feeling and audacity.

It also offers genuine thought and reflection — and not the usual art-and-entertainment-world, gender/power/class/race crapola. De Palma is genuinely a science-idea-driven filmmaker. When I interviewed him some years ago, I found him guarded and perverse. Then I ventured the thought that I was convinced his thriller “The Fury” — like “Mission to Mars,” occasionally preposterous on the surface but brilliant underneath — was really all about cybernetics (a science that studies feedback and control, and that has been of intense interest to people in computers and neuroscience), and riffed on how the film’s themes, organization and staging suggested circuitry and feedback loops of both the electronic and organic type.

He brightened up and told me he’d written a thesis in college on cybernetics, and from then on the interview went swimmingly. (The Times the other day ran a story about some scientists who have proposed that a meteorite shower millions of years ago perhaps seeded the earth — an idea not far from one of the major ideas in the film.) “Mission to Mars” could be said to be about the human cost of our involvement in our ideas and adventures, and about how that cost makes us ask ourselves some of the big questions: Why, for instance, are we forever getting ourselves into these predicaments? And what are the sources of our drives?

Here are some tips about what to watch for in the film. Look for circles and spirals, the way circles are always morphing into spirals, and the ways De Palma associates these shapes with dance and rhythm: the pulsing double helixes, the twister that swallows the crew in the first act, the way blood and soda spiral around in weightlessness — images that made me, for one, gasp at their beauty. Even the film’s telescoping narrative suggests a spiral — it begins in great circling camera moves set to swirling Louisiana music, moves through several apparent protagonists, and ends with a blastoff through a column of luminous swirling debris.

Watch for the use of toys, models and rehearsals. An early emergency occurs when a micrometeorite breaks through a touch-screen the astronauts are using to prepare for dealing with emergencies. Suddenly they’re contending with an emergency they had no way of anticipating.

The film begins with a visual joke — a rocket blastoff that turns out to be a toy rocket. By the final blastoff, real lives are at stake. De Palma is talking about the way we seem to be moving from an industrial culture that demands certitude and explanation to an information culture, where everything is a matter of probability and we try to comprehend the world by making models of it. Kubrick, our only other truly intellectual feature-filmmaker, got the respect for his brains (even for “Eyes Wide Shut” !) that De Palma has never gotten — perhaps because the later Kubrick always maintained a magisterial, Euro-serious manner. De Palma is more American and boyish; he at least tries to deliver the pop goods.

You’ve never seen a movie where so much of it is upside down, circular, or rotating. De Palma swoops in, right through windows and other barriers, on his space-suited characters as they float about, or walk around in circles. He’s suggesting the fun and fact of weightlessness, of course, but also the giddiness of that domain we’re all getting to know called cyberspace, and perhaps the experience of thought itself. Watch also for the way the number three keeps recurring, and let yourself play with its resonances and suggestions: mother/father/child, the three acts of conventional drama, the three main parts of the human body, the three orders of classical architecture. The Christian Trinity, also: De Palma makes a point of always having someone say, when experiencing terror or surprise, “Jesus,” or “My God.”

There’s a real vision here — of life as a game that, whether we want it to or not, will always get serious on us; an almost Tantric vision of women (the circle) and men (the column) attaining occasional bliss (the spiral) together; of art and religion as the outs that our fate occasionally permits us. And it’s a vision of the place of ideas and belief in our lives. The film might be said to be a meditation on origins and destinies, couplehood and death, and the fate of pictorial storytelling in the age of the computer — motifs and themes that are braided through the film with a complexity that suggests two great late Chris Marker films, “Sans Soleil” and “The Last Bolshevik.”

Why did the press come down so heavily on “Mission to Mars”? On a surface level, the film certainly isn’t as convincing or dynamic as it perhaps ought to be. But there’s plenty of high-quality urgent realism to be had these days — “Law and Order,” for instance, is on TV nearly every night. Why insist on it from every work of dramatic entertainment? Some reviewers complained that when emergencies occurred, the astronauts remained too poker-faced. But many people enter a deliberate, calm state during emergencies. Do we really need the usual flashing red lights, and extras rushing about as though supplying background action for “E.R.”? The film is certainly unusual — internalized, yet played out as spectacle. But at least some reviewers are familiar with the likes of Tarkovsky’s legendary “Solaris,” the winner of no one’s awards for plausibility or peppy editing. And is the film’s much-ridiculed dialog really worse than the dialog in “2001” or “Aliens”? Really? The film was even mocked for its space creature — but she struck me as a witty fusion of the Roswell alien and a Cambodian Buddha, along with suggestions of E.T.; in a nice touch, her frog eyes echo Sinise’s.

Is it unfair of me to wonder aloud whether, at a time when ironic or edgy media gloating is the preferred tone, the film’s combination of intellectuality and emotional straightforwardness was hard for reviewers to process? But perhaps they really just didn’t enjoy the film. Too bad — there’s much there to love. Here’s my tip for those who know and respond to some of De Palma’s work: “Mission to Mars” is one of his tender, personal films, like “Blow Out” and “Casualties of War.” For those who have never tuned in to his movies, this isn’t the one that will win you over, though I don’t think even on a surface level it’s as bad as it’s been made out to be.

For everyone else: Why not try “Mission to Mars”? If you don’t mind forgiving some surface gaffes and letting the film’s deeper structures go to work on you, you might find yourself enjoying some unusual visions. Late in the film, Sinise is being prepared for a long journey. He steps into a lighted circle, is encased in a glass column (those circles! those columns!), and is submerged in a clear, roiling liquid. In a panic, he holds his breath until he can’t hold it anymore. The air finally bursts out of him — but then he finds he can get oxygen from the fluid. Is he a baby in a womb or a living exhibit? Is he dying or in ecstasy? In any case, this questing, melancholy searcher is finally going home. “Mission to Mars” is a nerd’s rhapsody.