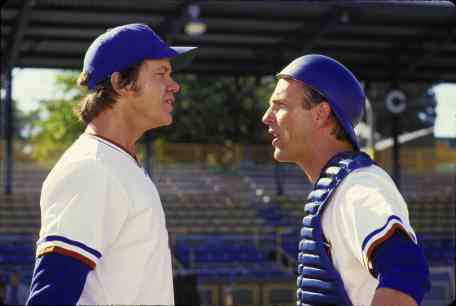 Set in baseball’s minor leagues and written and directed by Ron Shelton, who spent five years in the minors himself, “Bull Durham” is a comic, engaging mix of burliness and delicacy. It gives, in movie terms, a version of the so-stirring-they’re-funny emotions that sports events sometimes deliver, and it’s full of scenes that are instant classics.

As it begins, a soul-gospel voice soars over sepia photos of baseball heroes, and Susan Sarandon, in a voice-over, explains that to her baseball is a religion. She plays a baseball groupie in perhaps her mid-30s. Kevin Costner is a seasoned catcher nearing the end of his playing career who’s sent to the Durham, N.C., Bulls by their parent organization to break in a gifted but loutish young pitcher, played by Tim Robbins. Every year, Sarandon tells us, she takes one of the Bulls as her lover, and every year that lucky man has his best baseball year ever. This year she picks the kid, even as she and Costner size each other up over the kid’s head.

The film is about how to make the magic happen, or at least how to nudge it along — about how the ability to “throw smoke,” while exciting, doesn’t last long and isn’t everything. The kid has a hot arm and a hot dick, and he can’t figure out why Costner and Sarandon don’t think that’s enough. On the field, Costner faces him down, forcing him to mix his pitches up and obey the catcher’s signals; in the bedroom, Sarandon lures him into taking his time, and into letting her enjoyment become part of his pleasure.

The film has a goofy, sweet side that takes off from the fact that everyone in it is a baseball fan, even the ball players. When Costner tells his teammates about a few weeks he spent in the majors, there’s the kind of hush there might be if an Elvis nut were telling others about the day he shook hands with the King. When the kid is having a bad streak, Sarandon, who is taken with pop forms of mysticism, urges him to pay attention to his chakras, to be sure to breathe through his eyelids, and to wear one of her black garterbelts under his uniform. Costner laughs when he finds out, but respects her suggestions; after all, they might work.

Ron Shelton brings his own kind of seasoning to the picture. In addition to having spent time in the minors, he’s an experienced yarn spinner; he worked on the script of “Under Fire” and wrote “The Best of Times.” As a director, he’s warm and rowdy with actors, and he’s sly and deceptively lackadaisical; his story points always arrive with a lot more stuff on them that he’s led you to expect. The minor-league setting helps keep things colorful and in perspective — the spotlights are pointed elsewhere, so the people here can wear their idiosyncrasies more openly. Robbins makes a wonderful musclehead, and Costner and Sarandon seem ideally cast; they’re skillful, spirited actors — team players. And the film has a kind of daring in its suggestion that the Costner character — someone who never made it big, who’s on his way out and to whom almost no one has ever paid much attention — has his own accomplishments and points of legitimate pride. Yet it doesn’t sentimentalize, mythologize or romanticize him. We see that he gets by on tenacity, concentration and brains, and that he has managed to learn that there are concerns more important than making it in “the show,” which is minor-league slang for the majors.