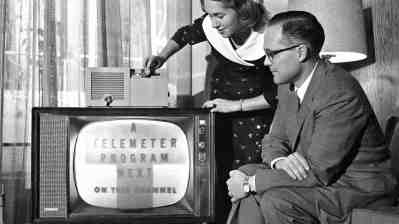 I have experienced “video on demand” and I’m spoiled for good. Ordering up what you want when you want it — that’s what video on demand means. At any time of the day — late, early, 13 minutes before the hour or 21 minutes after — you can point the remote control, click a few times, and start the program you choose.

Although video on demand won’t be generally available for five or ten years, you can get a taste of it now if you spend a night in one of the 125,000 hotel rooms that have been wired up to Guest Choice, a service devised by the visionaries at Spectradyne, the Dallas company that pioneered cable and pay-per-view movies in hotel rooms. Offering only a hundred or so programs — movies, sports features, “classic TV” — and working not via fiber-optic wires and computers but a videocassette jukebox, Guest Choice is a modest and quaintly low-tech version of the service.

Still, making use of it, you know that your relationship with the television has changed forever. It takes a moment or two to get used to the fact that your TV wants you to tell it what programming to deliver. Then it seems natural; after all, isn’t this the direction the human/television exchange was meant to take from the beginning? Within minutes, it becomes impossible to conceive of going out to a movie, or renting a videocassette, or waiting around for a program to begin.

Video on demand is obscenely pleasing — like having Rebecca de Mornay appear at your door and say, “Hi, I’m yours, do with me what you will.” It’s the ultimate in room service, and it’s instantly and completely corrupting. Now that it has arrived, it’s time to agree once and for all that television is the most seductive and versatile of all appliance/media/toys. Like de Mornay’s character in “Risky Business,” video on demand costs. But when it becomes available at home, the only reason you’ll have to go out will be to earn the money you need to afford to stay in.

©1994 by Ray Sawhill. First appeared in The Modern Review.